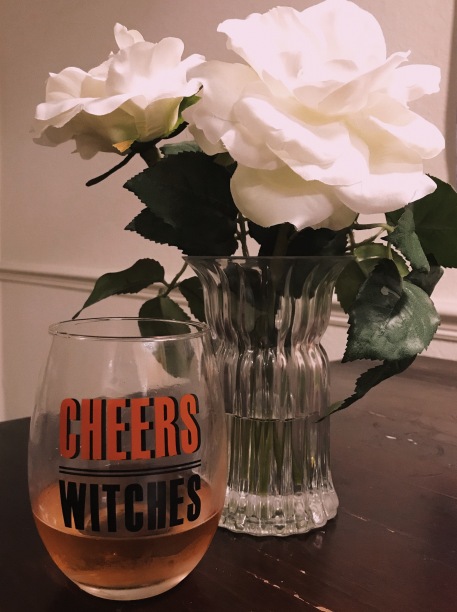 This is a bit of a random post, but I really had an urge to write this piece.  And I said I would post twice in a month, so here we are!! I’m excited to share this and I think that’s how I have to go about writing on the blog in the new year, you know, writing pieces that I’m excited about and what I feel inspired to write about. At some point, I’ll probably write a post about struggling with writing and my wishes for my future and all that, but I wanted to write a little fun piece about my favorite tv shows and how feminism and the supernatural play significant roles in the lives of these heroines and those who watch them.

As soon as I see a show with a strong female lead and a touch of the supernatural involved, I’m immediately invested. Buffy the Vampire Slayer has been a big part of my college life, and then there’s the new show The Chilling Adventures of Sabrina that’s quickly becoming important to me too, as I have been busy with my Netflixing because also, yes, I am still stuck in some sort of sadness. And Netflix binging helps. I think. Anyway, at first, I found Sabrina far more within the horror genre than the kind of silly scares of Buffy, and it is more scary I think, just because Buffy was so 90s and Sabrina is made in a time where graphics and everything can be that much more advanced and terrifying. But at the same time, there are elements that really remind me of Buffy within the show. Both are incredible in their own particular ways.

The main thing I wanted to talk about here that the two shows share, is a strong, young heroine who has to face the gravity of a requirement pushed upon her from birth. For Buffy, it’s keeping the world safe from vampires and other demons of the like, and for Sabrina, it’s choosing between light and dark, her humanity and her witchiness. I like to think of the destiny requirement as what it means to be a woman in this world. Being a woman comes with so much to deal with from birth. It’s not a choice, but something forced upon us at the hands of a patriarchal society where women are expected to not make their own choices and do exactly what they are told, without question. But it’s almost our destiny to break out of that, to leave these gendered expectations in the past. Shows like Buffy and Sabrina show characters breaking these molds and defying normal, accepted expectations. They are strong, independent bad asses, basically, not allowing their expectations to rule them. These two shows emphasize the destinies and the significance of the main characters’ lives through the details of a half-witch and a vampire slayer.

Sabrina, though, feels a lot more within the modern feminist outlook. It’s been created in this time where intersectionality and sexuality is being more explored even than when Buffy was first created. This doesn’t make Buffy any less feminist or less significant in the time in which it was created, but it does date the show to an extent. Though, Buffy does have significant moments where these topics are explored more than other shows presented around the same time, and that too is incredible, for example when Willow comes out and dates Tara in the later seasons.

In addition, both television shows display such fun chemistry between the characters and their friends and also all the supernatural elements. The supernatural is probably what draws most people to watching the shows, but I think people stay once they see how fun and exciting these heroines are and perhaps because of the deeper and more significant stories told throughout the seasons. I love the sense of the supernatural and horror details that are within the shows as they allow the more serious nature of the gravity of the heroines’ destinies to really be played around with. Hiding these important lessons within the demons and vampires is what makes these shows so important for the generations they inspire. It may not feel like intense feminist discourse filled television, but it has so many important lessons within it that give its viewers an insight into the world, without it feeling too overdrawn.

There are also some general similarities between the two teen shows. Particularly in episode five of Sabrina, the sleeping demon’s makeup immediately brought me back to all the vampires and demons Buffy has to kill throughout the series. I was so excited and pulled out of the world of Sabrina thinking about the influence Buffy has over the show. This was the real moment I started to see the Buffy-like nature of Sabrina.

Also, one last thing I want to say is that the two main characters are so important. I feel like I’m repeating myself at this point, but Buffy and Sabrina are such significant characters and they are so fun to watch develop as people. They are quick-witted, strong (in more ways than one), and heroic. They might often find themselves in trouble, but it’s because they care so much for the people around them. All this is really great for young women to witness and to learn from. They are such fun and inspiring heroines and I cannot express enough how important they are for young women, and young men too. It’s honestly so exciting to see Sabrina and how maybe she’s inspiring this generation in the way Buffy did for her generation. I’m kind of in the middle of the two generations, so it is fun to be able to be inspired by both in their own unique ways.

I know this is a little different than my usual (though few as there are) blog posts, but I really wanted to write about this. And I think it fits in well with the theme of my blog, though that too is a bit all over the place at the moment. But I like to think Jane Austen would find these two incredibly strong and witty heroines to be reminiscent of her own heroines and so I think they match my blog title at least. In case you chose not to read this piece and are simply skimming to the end to find out what the hell I’m talking about, here’s the thesis of the overall piece: Buffy Summers and Sabrina Spellman are two modern Austen heroines, not all that unlike Elizabeth Bennet, inspiring a whole new generation of young women to be like them in a really unique and interesting manner, showing girls that they can be whoever they want to be—especially amongst the horrors of girlhood and demonic forces.

Let me know your thoughts on this. I really love both of these shows and cannot wait for the next season of Sabrina. I may have updates even once the next season premieres because honestly, I don’t want to stop talking about this, like ever.  I also wanted to say that I’m not extremely well-versed in feminist discourse or even media studies, but I’m starting to learn a lot more and wanted to talk about this subject in regard to some of my favorite tv shows for fun. And I know this was a little bit of a rambling sounding post, but I just had a lot to say and wanted to write it all out, sorry. I definitely should have written this around Halloween, but maybe it’s always a good time to talk about the monsters of television, and the heroines who have to defeat them, ready to inspire generations of girls right now ready to defeat the monsters in their own lives.